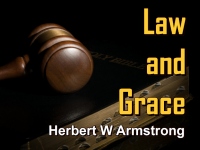 Well greetings friends. This is Herbert W Armstrong with the Good News of the World Tomorrow.
Why is it, my friends, if people are already saved when they accept Christ, why is it that God doesn't take the new converts immediately to heaven, if heaven is where they are to go? If heaven is the reward of the Christian, and you need to really search your Bible to see whether you can find a definite promise anywhere there that it is. Why must the professing Christian live on after he is completely saved? If he is completely saved when he professes Christ, accepts Christ, or is baptized, or makes his decision for Christ, or whatever wording you want to apply to it. Why is it that a Christian has to live on in this sordid world and suffer? You read that:
"Many are the afflictions of the righteous: but the [Eternal] delivers them out of them all." (Psalm 34:19)
Why does the righteous have to go through so many afflictions? Why do you read in your New Testament that: "...all [who] will live godly in Christ Jesus shall suffer persecution" (II Timothy 3:12)? Why do they have to suffer? If they are already saved and there's nothing to this Christian life, why don't they go off to heaven immediately? Or is there some purpose in the Christian life after all? There must be some purpose if God has us stay here after we accept Christ. What is the purpose then of the Christian life after conversion? Now you read in Galatians the third chapter and the very last verse that:
"...if [we are] Christ's, then [we are] Abraham's [children], and heirs according to the promise." (Galatians 3:29)
If we are Christ's, we're Abraham's children, that is Israelites, and we are heirs according to the promise made to Abraham. Well, you'd better search back and find out whether that promise was heaven or not, or what it was. But nevertheless that's not the point I want to bring up at this time. We are heirs, heirs, not possessors, not yet inheritors. Why don't we inherit the reward immediately, why are we only heirs now? Is there some purpose then to the present Christian life?

Well, my friends, the third chapter of Hebrews explains it. Now we've been going through this priesthood book, I think perhaps the most neglected book in the New Testament. The book that tells us about the mission of Jesus Christ now. As I said before, people do a lot of studying about the life of Christ on this earth for three and a half year ministry, during His ministry, and preaching the Gospel, and teaching His disciples three and a half years.
But, my friends, what has He been doing for now over 1900 years? What's He been doing? He's been very busy; He's been on the job night and day and He's on the job for you. And of course, even more important to us perhaps, certainly important in that relationship is; what does that have to do with us?
Now we've been seeing that Jesus Christ is our High Priest, and He's on the job as a High Priest. Well why do Christians need a High Priest? Why do Christians have to stay on and live in this life? Why do we need a High Priest? Why aren't we taken to heaven immediately? Why do we stay on and suffer? Why must we suffer persecution? Why is it "...through much tribulation [that we must] enter into the Kingdom of God." (Acts 14:22)? Why did Jesus say:
"Do not think that I came to bring peace: I came not to bring peace, but a sword. And a man's foes [his enemies], will be those of his own household [He said]. I have come to set a man at variance against his father, mother, or his wife or his children; and the children against their parents or their brothers and sisters. [And He said] if you love a father, mother or a wife or a husband [or whatever it may be] or children more than me [He said] you are not worthy of me. (Matthew 10:34-37 paraphrased)
Now He represented the persecution that is going to come and sometimes from those in our own household, He represented that, as a cross we have to bear. That is part of the persecution. So, as He bore His cross, sometimes we have to take up a cross of that sort and bear it, if we are Christians. Why?
Again, you'll remember that Jesus said when He was here on earth before, that: "...broad is the way [or the gate and easy and smooth is the way], that leads to destruction...many there be that go in thereat: But narrow is the gate, and strait is the road [ruddy, hard, difficult], that leads to [everlasting] life, and few [He said], there be that find it." (Matthew 7:13-14 paraphrased).
Why He said; "...I say unto you that many shall seek to enter into the Kingdom of God and shall not be able" (Luke 13:24 paraphrased). He said; "...It is more difficult [for instance] for a rich man to enter into the kingdom than for a camel to go through the eye of a needle" (Matthew 19:24 paraphrased). Now why did Jesus Christ say those things, you don't hear much of that kind of talk today, but that is what the Savior taught, that's what your Bible says. Why?

Ancient Israel Did Not Endure

God is Grieved with Disobedience

God Tests the Obedience of Israel

Now then, real quickly turn over here to Exodus 32, in the first four verses. I want you to notice, I want you to notice how they sinned, I want you to notice what their unbelief was. They didn't believe God, they didn't believe it made any difference. They didn't believe they had to obey. They thought; "Well, we can be under grace, you know, we don't have to be under any laws. We don't have to obey. We can be as impudent toward God as we want, we'll do what we think is right." That's what they did. Chapter 32, Exodus, beginning now with verse one:
"And when the people saw that Moses delayed to come down out of the mount [this was while he was up there with God for forty days right after God had given them the Ten Commandments], the people gathered themselves together unto Aaron, and said unto him, Up, make us gods, which shall go before us; for as for this Moses, the man that brought us up out of the land of Egypt, we wot not what is become of him [that's how much they thought about the man God sent to lead them, now verse two]. And Aaron said unto them [when they said they didn't know what had become of Moses], Break off the golden earrings, which are in the ears of your wives, of your sons, and of your daughters, and bring them unto me. And all the people [broke] off the golden earrings which were in their ears, and brought them unto Aaron. And he received them at their hand, and fashioned it with a graving tool, after he had made it a molten calf: and they said, These be thy gods, O Israel, [that] brought thee up out of the land of Egypt." (Exodus 32:1-4)
This is what God looks like. Well they went into idolatry. I won't need to read the rest of it, time is fleeting so, the seventh and eighth verses I was going to read. Well here:
"And the [Eternal] said unto Moses, Go, get thee down; for thy people, which thou broughtest out of the land of Egypt, have corrupted themselves: They have turned aside quickly out of the way which I commanded them: they have made them a molten calf, and they have worshipped it..." (Exodus 32: 7-8)
Now what were the two great sins of Israel? They worshipped idols and they broke God's Sabbath. Now God had said to them in Leviticus 26, He said; "Remember to obey me; if you will obey my voice, then you will be the most prosperous nation on earth". And:
"You shall make you no idols nor graven image...to bow down to them: ...I am the [Eternal] your God. You shall keep my sabbaths, and reverence my sanctuary: I am the [Eternal]. If you walk in my statutes, and keep my commandments, and do them; Then I will give you rain in due season, the land will yield its increase..." (Leviticus 26:1-4 paraphrased).
I'll give you peace in the land and you'll become the greatest nation on earth, and so forth. But if you won't, then He said I am going to punish you twenty-five hundred and twenty years. They didn't, and those were the two sins that drove Israel and Judah both, into their slavery and their captivity.
Oh, I wanted to go on now, into the twentieth chapter of Ezekiel and then into the seventeenth chapter of Jeremiah. I'll have to wait till tomorrow. Listen, I'm going to show you that those were the two great outstanding sins by which they were not faithful, that they were disobedient.
"Therefore [chapter four], while the promise of entering [into] his rest remains [for us today, while it's today for you and for me now], let us fear lest any of you be judged to have failed to reach it." (Hebrews 4:1 RSV)
And you are going to see, my friends, that we have to be obedient in the same way exactly, that they did. It's just as wrong, my friends, to fashion an idol out of golden earrings, or anything else, and worship it today as it was then. And it's just as wrong to break any of God's commandments today as it was then, and I want to tell you it does make a difference to God.