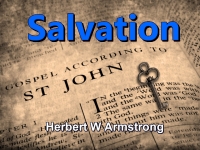 A few years back, a man who was eighty-two years of age came to me and said, "I've never heard the real plain why's and wherefore's of this thing we call salvation explained. I've never heard it explained so that it made sense."
You know, I think there are a lot of people like that, and there are a lot of people all over the United States, some of which take for granted a certain recipe of salvation that they have heard of, perhaps some of them something like a superstition, and there are many others that just scoff and sneer at the whole thing because it doesn't seem to make sense.
Now first, before you can understand this thing, that is quite a subject by the way, we have thousands upon thousands of churches here in the United States and yet we also have thousands and perhaps millions of people a few millions, at least that never go to church. They never darken the door of a church. You ask them, "What is your religion?" or "What are you religiously?" or "What denomination?" or something, they just say, "Oh, I'm nothing." It seems sort of foolish to them, or they get their minds on something else.
Now, just what is this thing that is called salvation? Does it make sense? You know, first of all you have to know what it is before you know why or wherefore or how it works. Now, many assume that salvation is merely God's effort to repair the damage that was caused by Adam's sin; that is usually phrased as "the fall of man." And so, as a result of what Adam did, we're supposed to be born in a fallen state. And God's effort at salvation is assumed by a great many people. I don't think they ever look into it very deeply, but they just sort of have the vague idea that God's effort at salvation is God's effort to do the best He can to restore us to a condition as good as Adam was before the fall. In other words, God had completed His creation. Everything was perfect.
They look back here in the very first chapter of Genesis and, "In the beginning God created the heaven and the earth", (Genesis 1:1) and the very last verse of that first chapter says that, "God saw everything that he had made and behold it was very good," (Genesis 1:31) and they assume God had completed all creation. God's through creating; now He's gone off to do something else. Or, He's like the Professor Emeritus: He once did great things way back there when He created the earth, but He's grown old and feeble now and doesn't do very much anymore. At least God doesn't seem to be around in the conceptions of most people. Although, you know, we don't think of it specifically. We don't stop to get these things out and analyze what we do think, what we do believe. We don't stop to set them down and look at them and really stop to think about them, or to investigate to see whether there is any truth to what we believe, or whether we've ever proved it, or whether it makes sense, whether there's any real reason to it.

The Proof Of Prophecy

There are many lines of proof and one of them is prophecy fulfilled prophecy. And that's one, let me tell you, that no agnostic, no atheist, no skeptic has ever tried to disprove! They can't do it. There is a great deal of prophecy that was intended to be fulfilled prior to this time and has been fulfilled, hundreds of years, even thousands of years after the prophecy was written. And it stands there as a living proof and as a daring challenge to the skeptics as to whether a man wrote a prophecy way back there and was able to bring it to pass or whether a god did, and whether the Bible is that word, and whether this word stands. There's a great deal of prophecy that stands fulfilled.
Great cities that were the great cities, teaming metropolises, way back there, as great in the world of that day as New York and London are, and Paris in today's world, some of them in the Bible, did a man write it or did God write it? He said, "This city will be destroyed and will never be rebuilt. It will be a desolate ruin and no man will ever dwell where this city is." And other cities He said, "They will continue, but they're going to be invaded, and they're to change hands, and they're going to be a subject people", or "they're going to be greatly diminished." And in every case it's happened exactly as whoever or whatever was writing this in this word said hundreds and thousands of years before it happened.
Now, there are many prophecies yet to be fulfilled. Can you believe them? Well, if you don't believe what's already happened I don't think you would. Now, very few people set out to really prove these things, and most people think that this thing we call salvation is just God's rather feeble and pitiful effort to restore the damage done by what we call "the fall of man" and to make us as good as Adam was before he fell.

God Is Reproducing Himself

You know, I knew a lawyer. He's dead now, but he was, in his day, the leading, I'm sure he was acknowledged, the leading corporation lawyer up in Portland, Oregon. And he was one man that, as you say in the vernacular, I considered him, and a good many others did, a "wise old owl." He had a sharp tongue. I'd hate to be on the witness stand with him on the opposition's side cross-examining me. And that man seemed to have a lot of wisdom.
Now, he wasn't a Christian. He didn't believe in Christianity. He didn't believe in any salvation or anything of the kind. No, he didn't believe those things. But you know, he kept a Bible in his desk, and I saw it every time he'd open his desk. I'd see a Bible there.
I asked him one day why he kept that Bible there. He says, "Just for one book in it." He says, "That Book of Proverbs has more wisdom than any thing I've ever seen. I read that book of Proverbs." He says, "I occasionally read in other portions. I find a lot of wisdom in it, more wisdom in the Bible than any book that's ever been written."
Yes, even Elbert Hubbard with all of his bragging of his wisdom, he never could have claimed that he had... Well, I think he would have claimed it. I knew Elbert Hubbard. I knew him well enough to believe he might have claimed it. I never asked him that question, but he probably would have claimed that he had more wisdom than Solomon. But he didn't, you know. Solomon knew a few things about spiritual things. Elbert Hubbard didn't. He had a lot of wisdom about just natural things in this world, and all that sort of thing, but that was all.
Now, if you can believe this, this is the word of God. You better prove whether it is or not. I've proved it. I can't prove it to you. You'll have to prove it to your own satisfaction. I'm not trying to argue you into anything because I know I can't do it. But I wanted to know, do you? I went after the proof and I found the proof, and I know. I'm not guessing. Now, you can know. You don't have to guess.