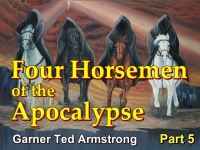 I heard the third beast say, Come and see. And I beheld, and lo a black horse; and he that sat on him had a pair of balances in his hand. - The world population will double by the end of this century and it will double again in just another thirty five short years following that. Inexorably, the food versus population curve continues toward that final climatic crossing point on the global charts of food production versus skyrocketing populations which could usher in upon this earth the final last great catastrophic fulfillm